Welcome to the latest installment of the Forward Motion Merry-Go-Round Blog Tour! We’ve gathered several writers from amateur to professional, and we discuss one topic for the month. This month’s theme is about my influences. There are a lot of people (some of them even writers) that I’d like to be compared to, people that I’ve attempted to emulate in my life and work. I think everyone searches for heroes and role models. It’s human nature and, depending on the hero, a positive thing. Here are some of mine:

My earliest memory of who I wanted to be like was Adam West as Batman. I read comic books through my childhood, usually gravitating more toward Batman than any other hero. The movies with Michael Keaton (and recently Christian Bale) have always had a great impact on me. Batman doesn’t have superpowers, and neither do I. He has to make do with his wits and resources to achieve his goals. I’m not a billionaire, however. My resources are limited, but I do what I can with what I have. It forces me to think outside of the box sometimes, and that’s good for personal growth. I never want to stagnate in my thinking or writing.

I’m sure they’d both be surprised to hear this! Dad always struck me as being emotionally in control. He programmed computers for a career, and is still a techno-geek. He’s the one who introduced me to science fiction and chess. Mom taught me to use humor as a both a tool and a weapon. I see a lot of my dad’s dry humor in myself, but I use my mom’s wit to disarm, to break the tension, to distract. It’s a handy tool in my arsenal when dealing with rowdies and vagrants at work. (I’m a security officer at a hotel.) She also taught me to forge onward despite the obstacles blocking my way. My dad is the aspiring writer, my mom the aspiring artist. They both gave me a creative gift that I’ve enjoyed throughout my life.

Without her I wouldn’t be where I am now. She allowed me to become myself, whatever that might be, without fear of rejection. Considering fear is a large factor in my life (wide yellow streak running down my back) that was a huge gift. I can’t say I was too impressed with it at the time, but twenty-four years later I’ve come to realize how tremendous an impact she has had on me. No matter what, I know that she will accept me for what I am.

The first author that sparked the desire to write books. I read her book, A Place Beyond Man, multiple times. In the late seventies, science fiction was just beginning to get away from the pulp stuff written in the fifties. Back in the day, it was still rocket ships and masculine heroes who had no time for the little women screaming at every alien attacker. I don’t know how else to describe it. The words they used didn’t inspire a romantic response within me, even when there was an alleged romance going on between two characters. Neeper’s book was ahead of its time in that regard as well as another — a polyamorous relationship between three different species. That really set my mind cooking. There were no romance novels in my house, so I had no experience. I’d never read something of this nature. I wanted to write my own books like this. 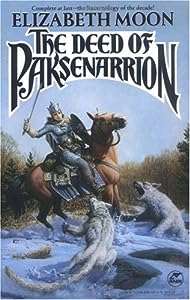 Another author that had a direct impact on my writing. Her series, The Legacy of Gird, was phenomenal. It wasn’t a standard fantasy novel despite the fact that it had elves and dwarves and sorcerers aplenty. The characters and locations were rooted in a reality I’d never experienced while reading Terry Brooks or J.R.R. Tolkien. The gritty realism and small-scale tactics and strategy made so much sense to me. Moon followed Gird’s series with another, The Deeds of Paknessarion, which is one of my all-time favorites. Paks and her world or so real to me, her day-to-day existence chronicled in such a way as to be educational without boring me to tears. I can only hope to do the same in my own writing as I educate the reader on the worlds I’ve built for their entertainment.

The creator of Forward Motion, she’s also a prolific science fiction author. Additionally, she has a number of writing courses available. I’ve learned so much from her, both from her courses and from the writers in her community. The depth of the Sanguire are a direct result of her Create a Culture Clinic. She puts a lot of work into her worlds, characters, and plots, and has created multiple courses for the aspiring writer to use in building their own. She’s developed so many wonderful resources, and I’m a richer writer because of it.

Those are my most vital influences to date. There are a handful of others, but none with as strong an impact as these people. What about you?

Scroll down and leave a comment! Who do you look to for guidance and inspiration?

Today’s post was inspired by the Merry-go-Round Blog Tour, an ongoing tour where you, the reader, travel around the world from author’s blog to author’s blog. We have all sorts of writers at all stages in their writing career, so there’s something for everyone to enjoy. If you want to get to know nearly twenty other writers, and find out what’s on their nightstands, check out the rest of the tour! On the 11th, the entry was by D. Anthony Brown. Tomorrow, see what David Bridger has to say on the matter! Happy reading!